From Seeds to Bees – NBS In The Press

If you’ve been following us over the last year or so, you’ll know we’ve been very busy!

We have introduced the UK’s first sterilised wax machine, launched our photography competition & produced the NBS 2020 Calendar with some of the best submissions, created our blog (which you should know about as you’re reading it!) and have publicised many other exciting announcements. We’ve also greatly improved our product range, but that’s a story for another day.

Our friends at BeeCraft – The Informed Voice of British Beekeeping, popped in to see our MD, David, to have a chat and have written a fantastic piece about us! If you’d like to know a little more about our story, past, present and future – read on, the full article is below…

From Seeds to Bees

National Bee Supplies is one of the UK’s best-known beekeeping suppliers. Customers will have noticed a new look to the business in recent years, along with a growing range of products. I visited the company to find out what is behind this revival.

Although an independently owned business since its formation as Exeter Bee Supplies in 1981, National Bee Supplies (NBS) is now part of the well-known gardening company, Suttons. I met managing director and co-owner of Suttons, David Robinson, at their impressive headquarters in the seaside resort of Paignton, Devon, where he gave me a guided tour of the building and explained the history of the business.

Sutton’s Seeds was established in 1806 by Reading corn merchant John Sutton. The business grew rapidly, becoming trusted because it tested the quality of its seeds in trial nurseries and because the seeds it supplied were the genuine thing – this at a time when adulteration was common. In 1840, the Great Western Railway arrived in Reading, allowing Suttons to efficiently distribute its products all over the country – and the Empire. The company supplied the Royal Household and received a Royal Warrant from Queen Victoria in 1858.This has been updated by every monarch since then. The company grew continuously, becoming the UK’s biggest and best-known supplier of fruit, flower and vegetable seeds.

By the 2000s, and now based in Devon, Suttons was owned by a multinational company. Although the business was still trading well, it was losing money. It was then that David and his business partner, Rufus Roberts, decided to attempt a management buy-out. Their bid was successful, and in 2014 Suttons came under their control. Since then the business has bloomed once again. 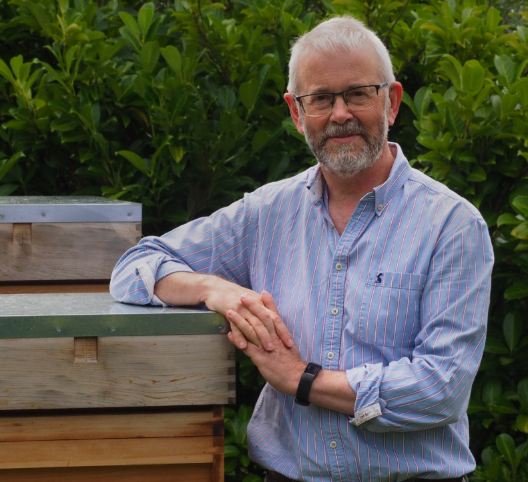 As we walked around the company’s enormous warehouse, with its rows of shelving crammed with seeds, bulbs and thousands of garden products, David told me about how National Bee Supplies (NBS) became part of Suttons. “A few years ago, we featured some solitary bee hotels in our seed catalogue and were surprised when they became one of our best sellers. So we began to think about stocking beehives and beekeeping equipment. If I’m honest, we didn’t know much about bees. We researched all the British hive manufacturers to see who made the best hives and, much to our delight, found that those we liked most were made by National Bee Supplies, just up the road from us in Okehampton.”

David visited NBS to ask the owner, Bill Stevens, if he would be prepared to sell hives to Suttons. Rather than offering to sell them just hives, Bill told them he wanted to retire and asked if they wanted to buy the whole business. “We didn’t have to think about it for very long,” said David. “NBS was producing fantastic hives and other equipment and had a great store of knowledge and experience. It was also immediately obvious that a gardening company and a beekeeping supplies company complemented one another perfectly.” 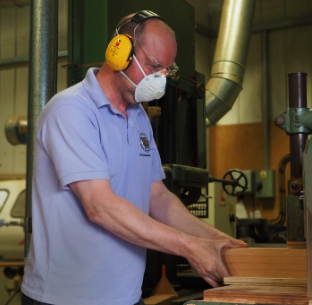 We drove to the Okehampton base of NBS, entering via the spacious and well-stocked beekeeping supplies shop where we met manager Lisa McNally, who has played a large part in the recent success of the business. Behind the shop is the large workshop where the hives are made. Here we met Chris Matthews, who has worked for NBS for more than 25 years and who explained how they make their hives.

The process begins with the arrival of rough-sawn western red cedar from Canada. This is the best timber for making hives as it is slow grown, tightly grained and has very few knots. Each plank is carefully studied to ascertain how it should best be divided up to make different hive components. They are then cut down, with each piece being slightly larger than needed to allow for shrinkage during the six to twelve months it will take to air-dry before use. Chris explained that at NBS they insist wood has the correct moisture content when made into hives. Timber that is too wet or too dry can shrink or expand considerably, affecting the soundness of joints and even critically affecting bee space. The time taken to dry timber has a significant effect on stock control – if more hives than expected are sold it isn’t possible to obtain more timber for immediate use.

Some impressive traditional woodworking machinery – including the biggest band saw I’ve ever seen – along with a range of computer-controlled cutting, planing and jointing equipment is used to produce the final hive components which are then joined together with resin glue to make incredibly strong boxes. At the end of the production line, I saw a stack of finished WBC lifts and couldn’t resist running my hand over them. The quality of the timber and the joinery was outstanding, and it was easy to see why NBS is renowned for its hives. 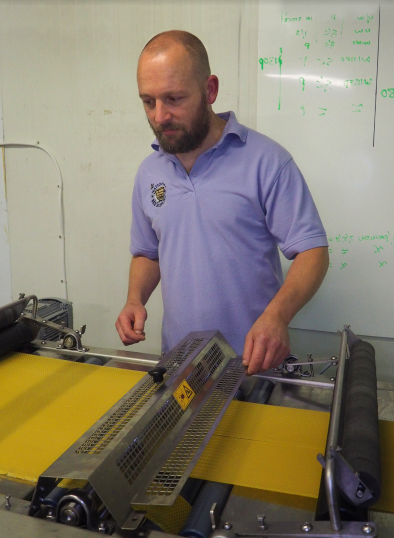 With the support of Suttons, NBS has been able to increase its product range, most significantly becoming the only UK supplier to offer sterilised wax foundation. The foundation is produced in a warm, beautifully wax-scented room that is dominated by a brand-new stainless-steel wax production line. The process is overseen by Brian McLean,who moves from one part of the machine to another, minutely adjusting speeds and temperatures in a process that seems akin to alchemy. About 350 kg of wax at a time is melted in a huge triple-walled tank. The liquid wax is held at 125°C for at least an hour, destroying all known pathogens including EFB, AFB and nosema.

The liquid wax is then pumped onto a rotating, cold water-filled drum where it solidifies. The wax is peeled off as a continuous sheet, rolled to the correct thickness and fed through embossing rollers that stamp them with the worker-cell pattern. The wax is then cut to size, producing up to 6000 sheets of foundation on a good day.

Brian told me that changes in air temperature, wax quality or several other variables mean that output can sometimes be significantly lower as time is spent balancing the different factors to produce a quality product.

As we watched the wax machinery at work, I asked David Robinson if he found it odd to have ended up in charge of a beekeeping supplies company. “Well it’s something I never would have expected,” he admitted. “But we are incredibly proud to be able to help this business go from strength to strength and it has all kinds of benefits for Suttons, such as our increasing focus on supplying seeds for pollinator-friendly plants. There have been personal benefits too. My wife and I are keen gardeners and have always enjoyed planting for bees and butterflies. Two years ago we obtained our first colonies of honey bees and learning to look after them and make our garden a better place for them has been an exciting new adventure.”

So there we are! Hopefully you now know a little more about our story and how National Bee Supplies has seemly become an extremely important member of the Suttons family. You’ve also been introduced to a few members of the NBS team, why not pop in to our Okehampton Shop and meet them in person? We’re proud to provide the very best service and would love to welcome you through our doors in the near future.

Words and images courtesy of BeeCraft. To see the original article, and discover more about the brilliant role BeeCraft plays in our beekeeping community, you can visit their site by clicking here.

About the Author: Sam Arnold

Sam is a marketer, keen writer and lover of all things bee-related. Born and raised in Devon, he spent his youth getting lost on Dartmoor and equally lost in every book he could find. Sam loves writing about beekeeping throughout history, tasty recipes and the changing attitudes towards the humble bee.